Challenge # 11: The politics of fashion

A Swedish version of this post can be found here.

The theme for the 11th challenge was politics and fashion. There are of course many ways you could interpret that - among the things that I considered were a two-coloured hood in blue and red, like the rebelling burghers of Paris in the late 14th century, trousers, which of course had a very political charge when women started wearing them in the early 20th century, a  Bloomer costume, a chemise á la reine, or just a blue, white and red cockade  from the French revolution. But this winter I saw some amazing textile prints from 1920s and 1930s Soviet Union and  I really fell for them. This led to me looking up more info on Soviet textile and clothes design in the 1920s.
The Soviet Union in the '20s was really one of the hot spots in avant garde fashion design. Most people who are interested in 20th century fashion have heard of the French artist, textile and clothing designer  Sonia Delaunay, but just as radical and creative, and maybe more influential in the world of clothing, were Ljubov Popova och Varvara Stepanova. The latter devoted herself almost solely to the design of clothing after 1921. It wasn't just in France and the Soviet Union that modernist clothing was designed; Italy had a strong modernist current in fashion design, a current that often was combined with right wing radicalism and elitism. So it wasn't just socialists who wanted to create modern clothing from a political point of view. I strongly recommend the book  Against Fashion by Radu Stern - it even has an example of Stepanova's design for sports clothing on the cover. In any case, clothes were political and in the Soviet Union they should both be an expression of the new, liberated, working human and a means to achieve this new man and woman.
Since both Stepanova and Popova built so much of their design on their own prints it was hard for me to choose any of their designs to work from. Instead I chose a design by  Nadezhda Lamanova from 1925. Nadezhda Lamanova appears to have been something of a chameleon as a designer - from designing both theatre costumes and clothes for the Tsaritsa, like the one shown below, she after the revolution started designing clothes which combined inspiration from Russian folk costumes with the modern lines of the 1920s. 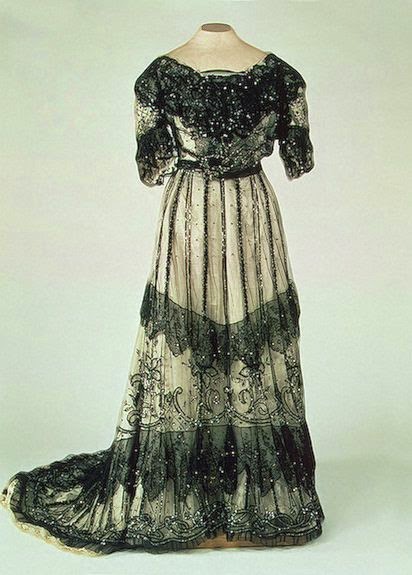 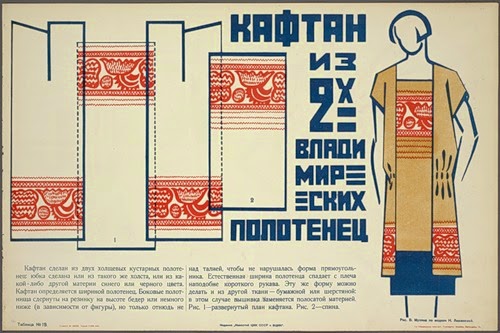 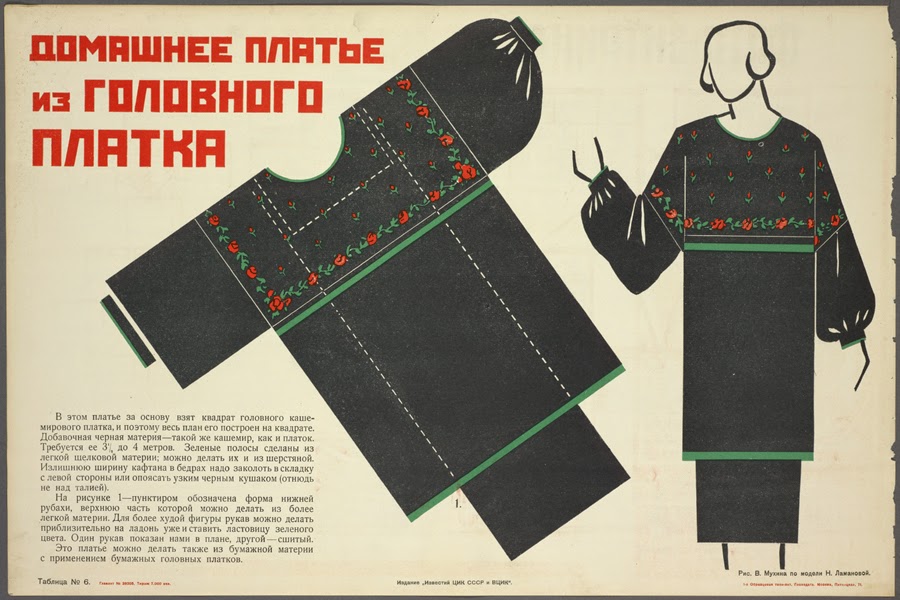 The black ensemble is made from Russian shawls. Since I neither have Russian shawls nor the time and/or opportunity to embroider or print special patterns I chose this design: . 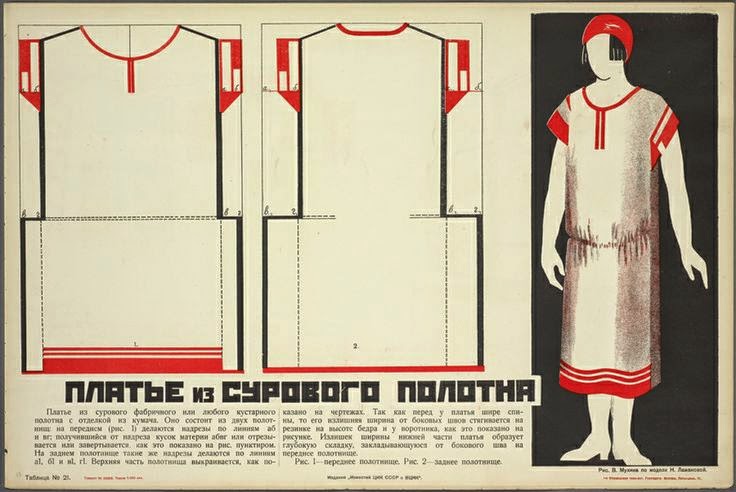 The fabric is a grey linen remnant that I got for cheap in January and the red linen is scraps from a dress that I made over ten years ago. The pattern can of course be seen from the image above, but I had good help from the blog posts about the one hour dress on  Festive attyre. I chose to  make the front piece gathered in a similar was as the back piece, since I wasn't really sure how Lamanova had intended the dress to be made and I was at least sure that this would work. The sleeves got a lot longer than on the sktech, but I don't think that matters. 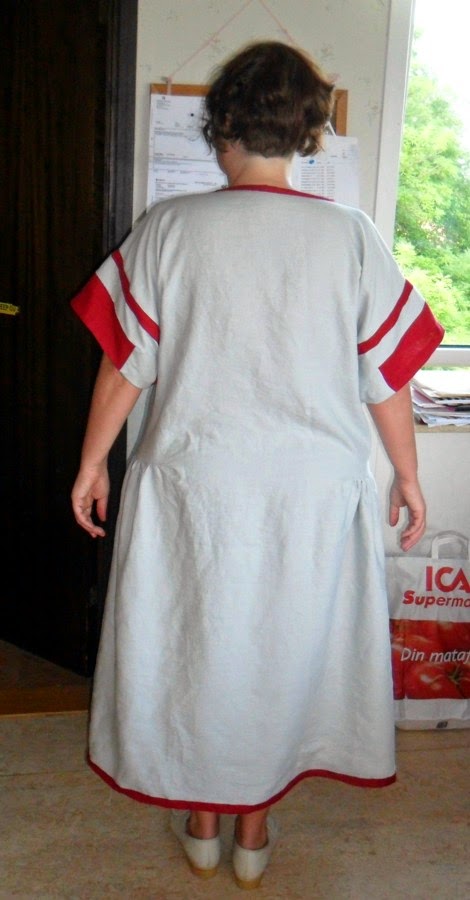 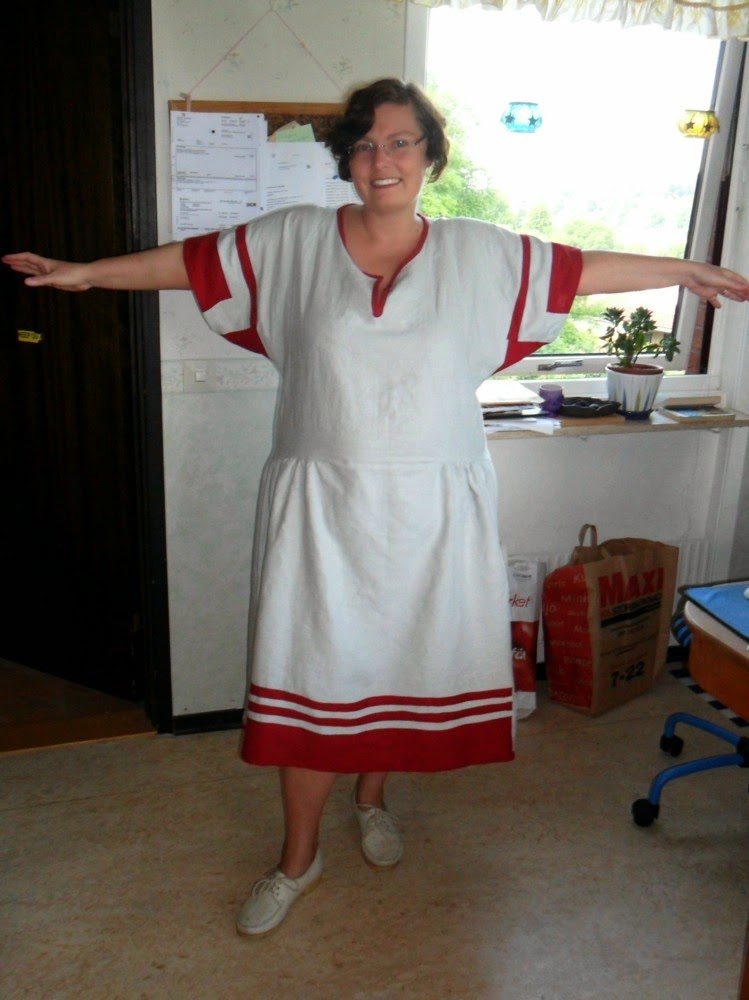 From the photo of the back you can also see that I have cut my hair at the back, in to a 1920s bob.